Brave Company by David Hill - a book to add to your Anzac Day collection.

Anzac Day is one of the most important days in the history of New Zealand.  It was the ignition of a series of events that began the formation of the New Zealand identity and loosened the apron ties of Mother England.  It was also the beginning of unimagined sacrifice by a country with a small population.

As a teacher, I believe that this important part of our history should never be forgotten and is a valuable part of the learning journey for our children.  Consequently I teach an Anzac Day unit each year and supply and read a selection of war stories to the children.

Last year I reviewed the David Hill novel My Brother's War set in WWI about two brothers, one who volunteered to serve and one who was a conscientious objector but was forced onto the battlefield against his beliefs.  I had read this book to my class and it encouraged other children to read it for themselves and even one child to ask her mother to purchase a copy for her.  Since that review I purchased another David Hill book focused on a different war.

Brave Company is set during the Korean Conflict and the main character is 16 year old Russell who is a member of the New Zealand Navy serving on a ship called HMNZS Taupo which has been sent to participate in the Korean Conflict.  Korea is war rarely discussed in terms of every day conversations on war, but New Zealand sent 4700 soldiers to serve during the 1950-1953 war and then as a peace keeping force during the armistice until 1957, and 1300 sailors served on frigates during the war and armistice, and all up 45 military personnel were lost.  (www.nzhistory.net.nz - Korean War)

I had a great uncle serve in Korea.  The first time I did an Anzac Day unit my Gran lent me a postcard Uncle T sent home about Christmas time with the Christmas Day menu on it.  I also treasure the photo I acquired of him in uniform with my great grandfather (who served in WWI) and great grandmother.  Uncle T saw enough of war in Korea to oppose his own son joining the army to serve in Vietnam.

This is the front cover and the blurb on the back cover: 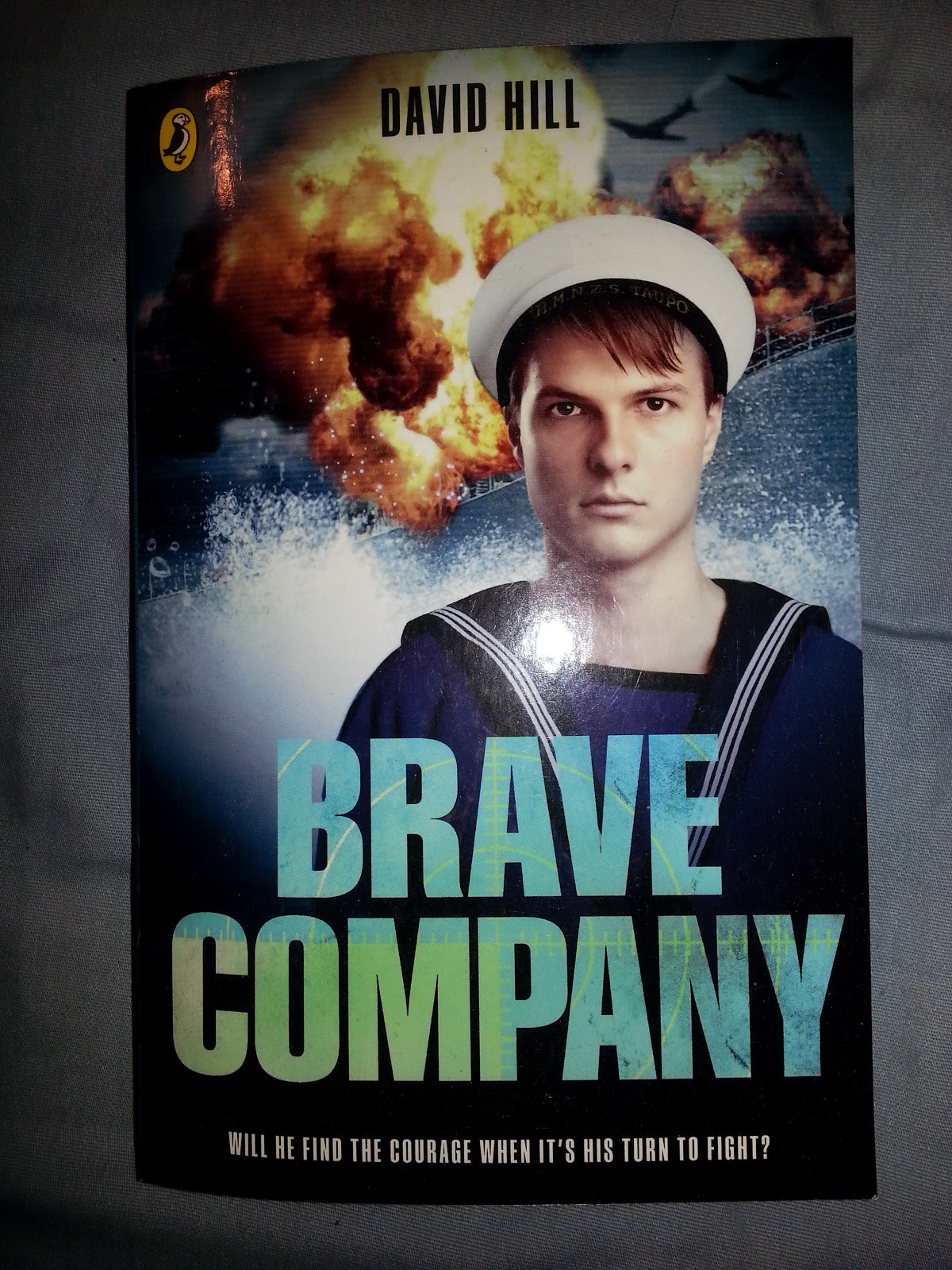 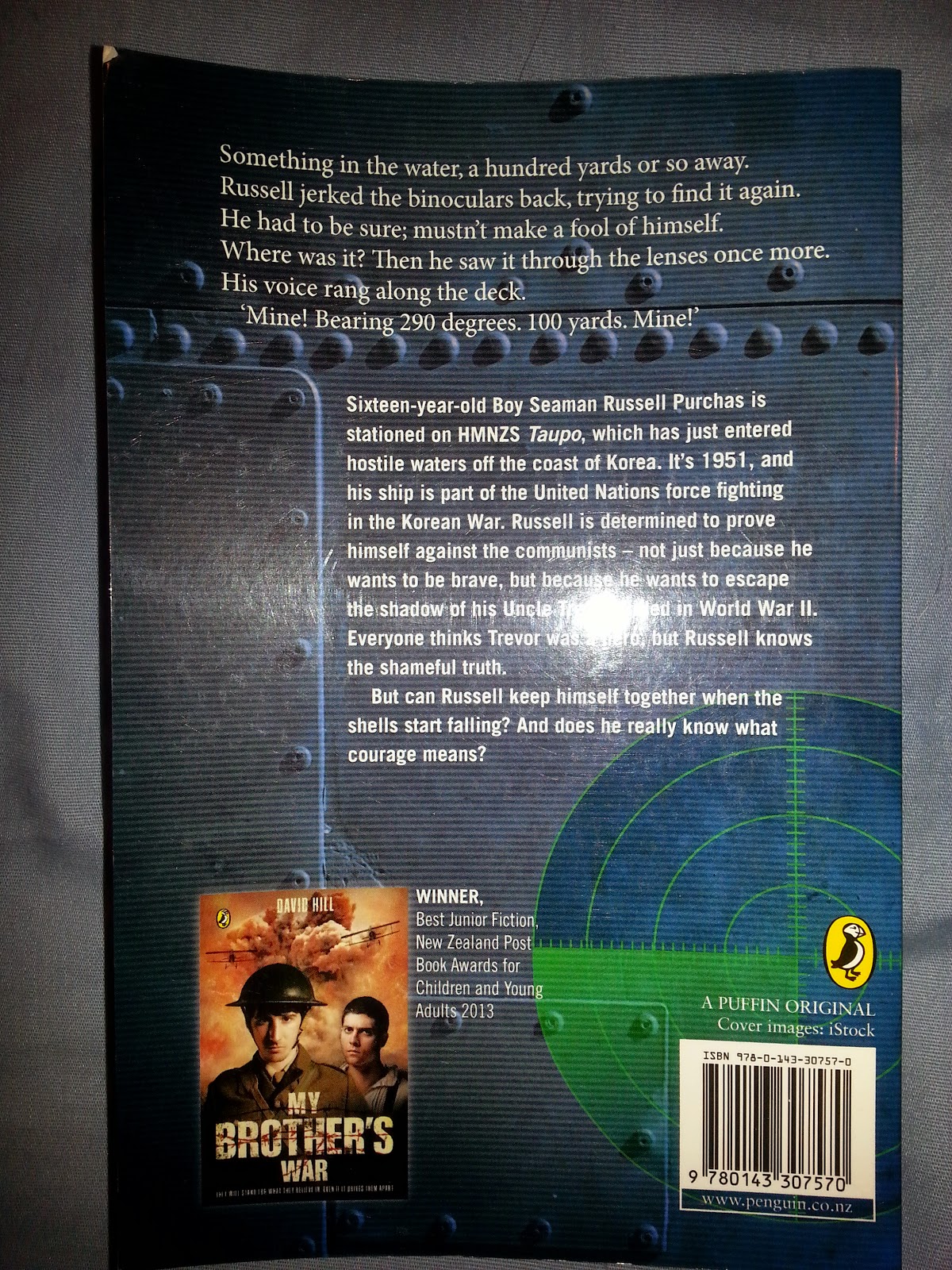 Russell's family has a secret about an uncle who served and died in WWII who Russell once looked up to.  During his time in Korea Russell finds out about his uncle and discovers not all in what it appears to be.
Russell is a boy seaman on a frigate and the battle scene the frigate is involved in is tense and described in detail.  The tension is built throughout the book with innuendo about his uncle weaved through.  Hill doesn't reveal the questions asked about Russell's uncle early in the book.  They emerge as Russell's character is revealed and he meets a man who served with his uncle as he makes several trips into the battlefields of Korea.
The book also reveals the plight of the Korean people as they fled their homes in the battle zone and the impact upon the children in particular.  Russell makes connections with a brother and sister in this predicament and demonstrates another side to his character as his understanding of their situation develops.
Again this is a great book to engage children in the realities and impacts of war.  It is a particularly good book to target boys aged 10 up to read, but I believe girls will also read this book.  I would definitely read it to a class and supply it as independent reading material.
Posted by melulater at 10:58