The Anzac Biscuit Man & Other Classic Kiwi Tales - the book that just keeps on giving.

One of my most favourite books to use in the classroom, as the teacher and as a reliever, is The Anzac Biscuit Man and Other Classic Kiwi Tales by Peter Millett. 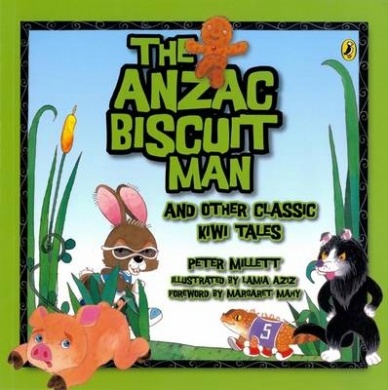 There are a number of ways I have used this book over the years it has been in my posession.
And that last point is what I am going to focus on in this post, because I've used this book twice in the same class in recent weeks while relieving and the children have lapped it up and I've been professionally satisfied.


So the class I was with is a fairly confident group of Year 7/8s in a semi-rural school on the edge of Hamilton, whose student are actually pretty urban.  These students are articulate, used to using ICT and are keen to express their creativity.  I've enjoyed these students immensely each day I have been with them.


One group choose to combine the idea of the kiwi and the ducks with their learning about the Treaty of Waitangi and the Land Wars and created a mini-movie of a land war between ducks and kiwi.


When the group who were at an intersports for swimming came back, they were employed in the movie group or by others to help finish their projects or completed outstanding work.  But one girl decided to Kiwi-ify the nursery rhyme Hey Diddle Diddle and publish and illustrate it.


Alas, I did not take pictures of their work that day.  I am kicking myself now.


Yesterday, the students choose the story The Anzac Biscuit Man.  We then brainstormed some possible activities inspired by the story, as seen in the picture below: 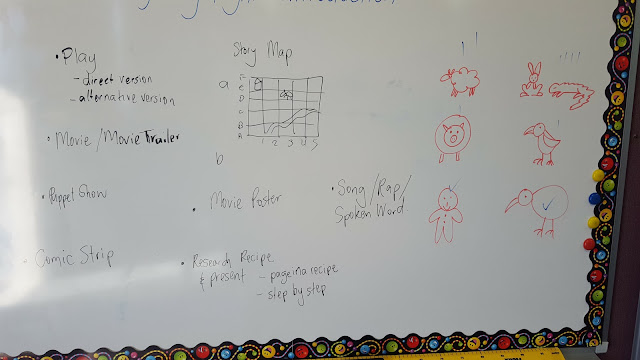 The red pictures on the right were used to decide which story we would read.  But as you can see we brainstormed:
Later on a student came up with another option: the packaging of the Anzac Biscuit Man biscuits (see picture below).

Immediately I saw students making decisions on their choice of activity, who they would work with and how they were going to get on with the task.  There was a high level of enthusiasm and a willingness to help out other groups when required as "subcontractors".


The group who had made the movie on the ducks and kiwi having a land war the week before bunched together to make a sequel.  Another group of boys wrote a script and decided to make a direct version of The Anzac Biscuit Man as a movie.  A group of girls decided to make a live play and asked to hire students from another class to help them out as actors.  One girl decided to make her's as a movie trailer.  She hired other students as actors but did the technical side herself.


One pair decided to make a movie poster, with one doing the technical work on the computer, while the other person did the drawings.  Another pair made a comic strip based on Anzac Biscuit Men breaking out of an oven to take revenge on frogs.  One boy came up with the idea of the Anzac Biscuit Man combined with The Flash to make a new super hero and merchanising biscuits.


I loved that the students came up with ways of making masks for their characters: 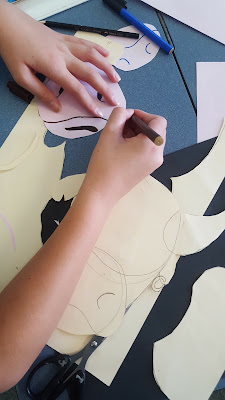 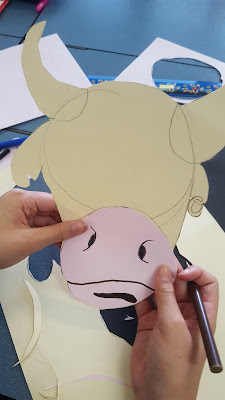 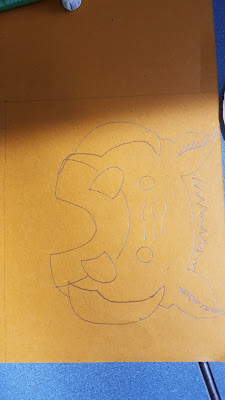 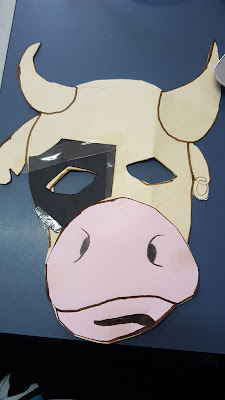 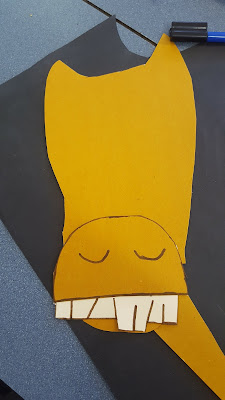 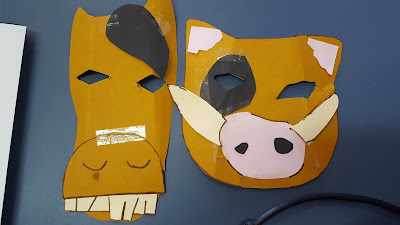 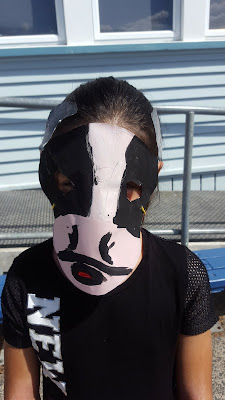 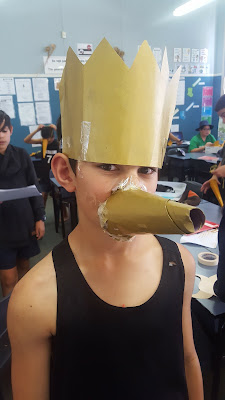 I loved how they were using their creativity to write scripts: 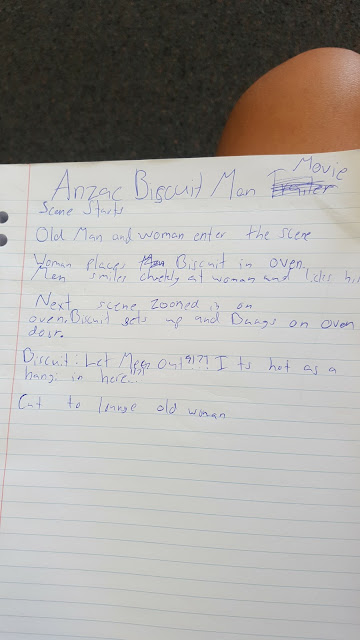 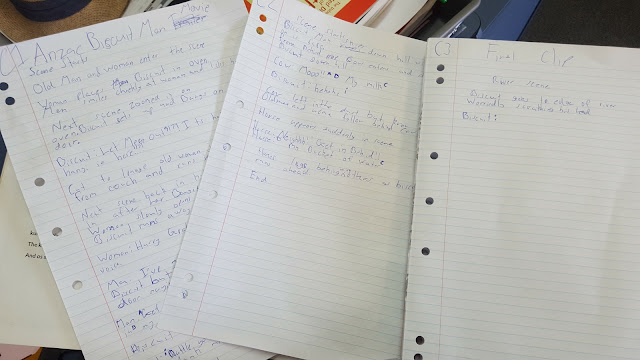 I loved that they were using their creativity to create a comic strip: 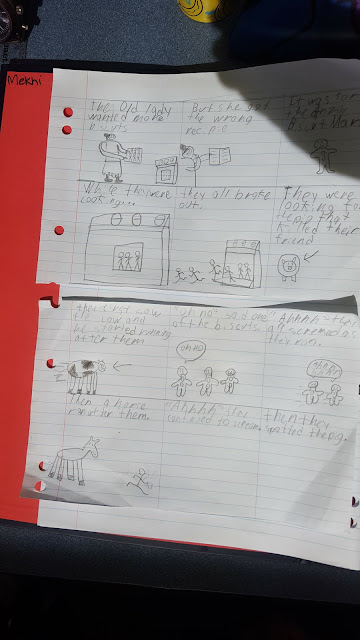 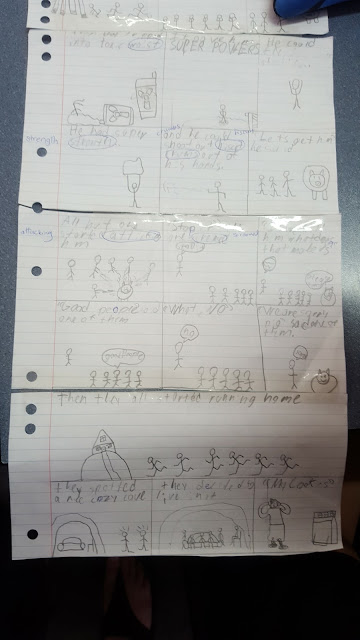 I loved that they were using their skills in multimedia to combine a drawn picture with a poster made on the computer: 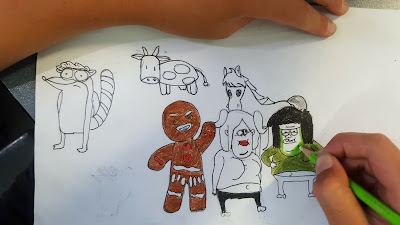 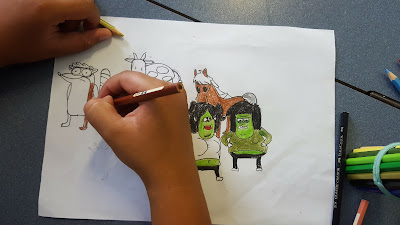 Sadly I neglected to take a copy of their finished product.  But they took a photo of their characters with the iPad, got it on the laptop, using the Snipping Tool they cut around the picture and inserted it in their poster they made on the laptop.


And I loved how one girl used the movie trailer app on the iPad to map out her trailer and filmed it up: 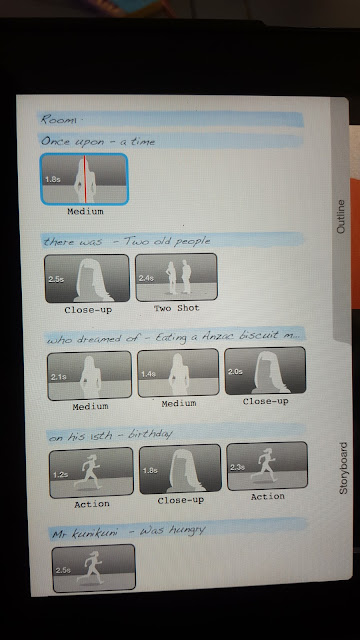 At the end of the day, the students invited the neighbouring class (some of whom they had hired to help them out), the DP and the principal to watch the finished product.  The students who had gone to the swimming sports yesterday had a bit of jealousy and their teacher was thrilled they had had a creative day and was looking forward to viewing what they had achieved.


Personally I found it very satisfying professionally.  Yes, if they were my class, we would spend longer on story development and getting a better finished product.  But what I am finding is that what we do achieve in one day is a lot of problem solving (socially, creatively, technically), learning about managing our time, learning about working in a group situation, learning about supporting other people in their learning.  I'm just their to make sure they achieve something at the end of the day.


And I can not wait to go back and see what they can come up with in reponse to the next story!


This is a Storify of the tweets from yesterday:

Sadly, Storify has deleted itself from the Social Media scene, so all my Storify stories have gone.  😭😭😭😭😭

Posted by melulater at 14:10 No comments: