The Classroom Environment - what makes a class attractive?

After school today I thought I'd take a quick look at my blogs.  First though I took a glance through my blog roll and a post by Bruce Hammond caught my eye: New School Year - what has been achieved?  So I had a bit of a read.
Bruce apparently had visited some schools towards the end of Week 6 and he said he was somewhat disappointed at the classroom displays.  This is what he said he had wanted to see:
I would've liked to have seen:

Evidence of a simple environmental study - based on students’ questions, valuing their ‘prior ideas’ including some observational drawings, language work and creative art. To ensure quality teachers need to teach simple presentation techniques/’scaffolds’.

I would've liked to have seen the above work well displayed with appropriate captions.

I would've also liked to have seen some focused personal writing about something the students’’ had experienced during their holidays. I would have liked to have seen these displayed well along with portraits or drawing featuring some aspect of the experience. To ensure students achieve best results teachers need to teach their students some simple presentation skills.
At the bottom of his post, Bruce had some practical links to unit ideas, lesson plans, ideas for the classroom environment and wall displays.
So it got me thinking, would Bruce be impressed with my classroom?
Granted, I've made a big effort to have my class looking great by the end of Week 7 for three reasons:
So here are some photos from around my room.  I kind of walked around in a clockwise direction from my desk (but avoided photographing that bombsite!).
Firstly, this is the display of the first unit we did this year.  It's average by my standards.  The Vocab Expander was a language activity for some of the more able in my class.  The flags were from earlier in the term when we made up our own flag designs in response to John Key's initiation of the change the flag debate.  Below those are some pictures from a social studies resource about the Treaty.  And the projects to the right are two of four research projects by four students.
﻿ 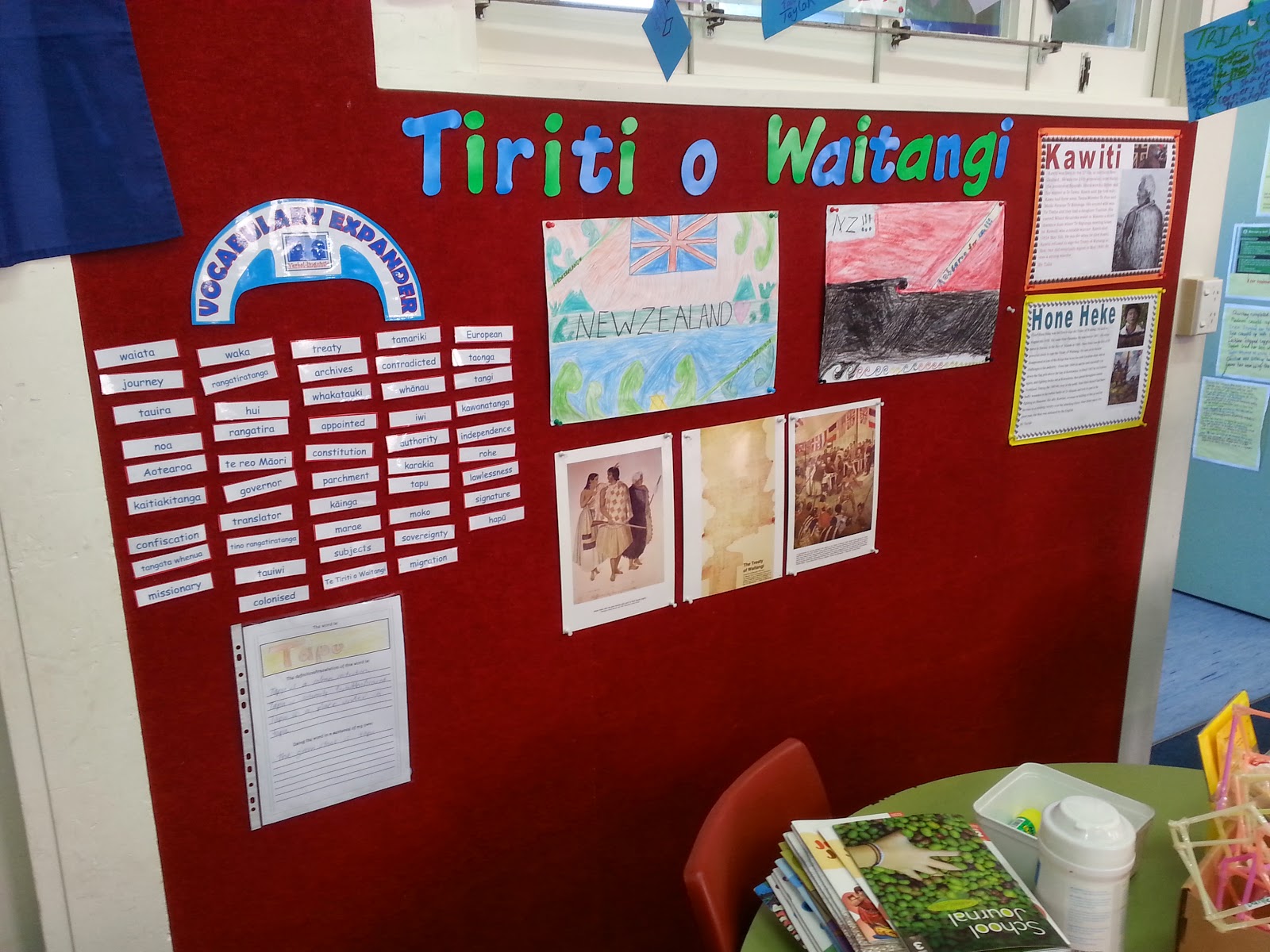 We have been doing geometry shapes and objects for maths.  The children used these shapes to help them describe the attributes of each shape.  They had to include how many sides and corners the shape had, and if the sides were straight, curved or continuous.  Each group had three students (one had four), and as a group they recorded the attributes, which is what those little cards dangling from each shape are.  Of course, despite having the correct spelling for most words needed on the board, some of the spelling is rather creative. 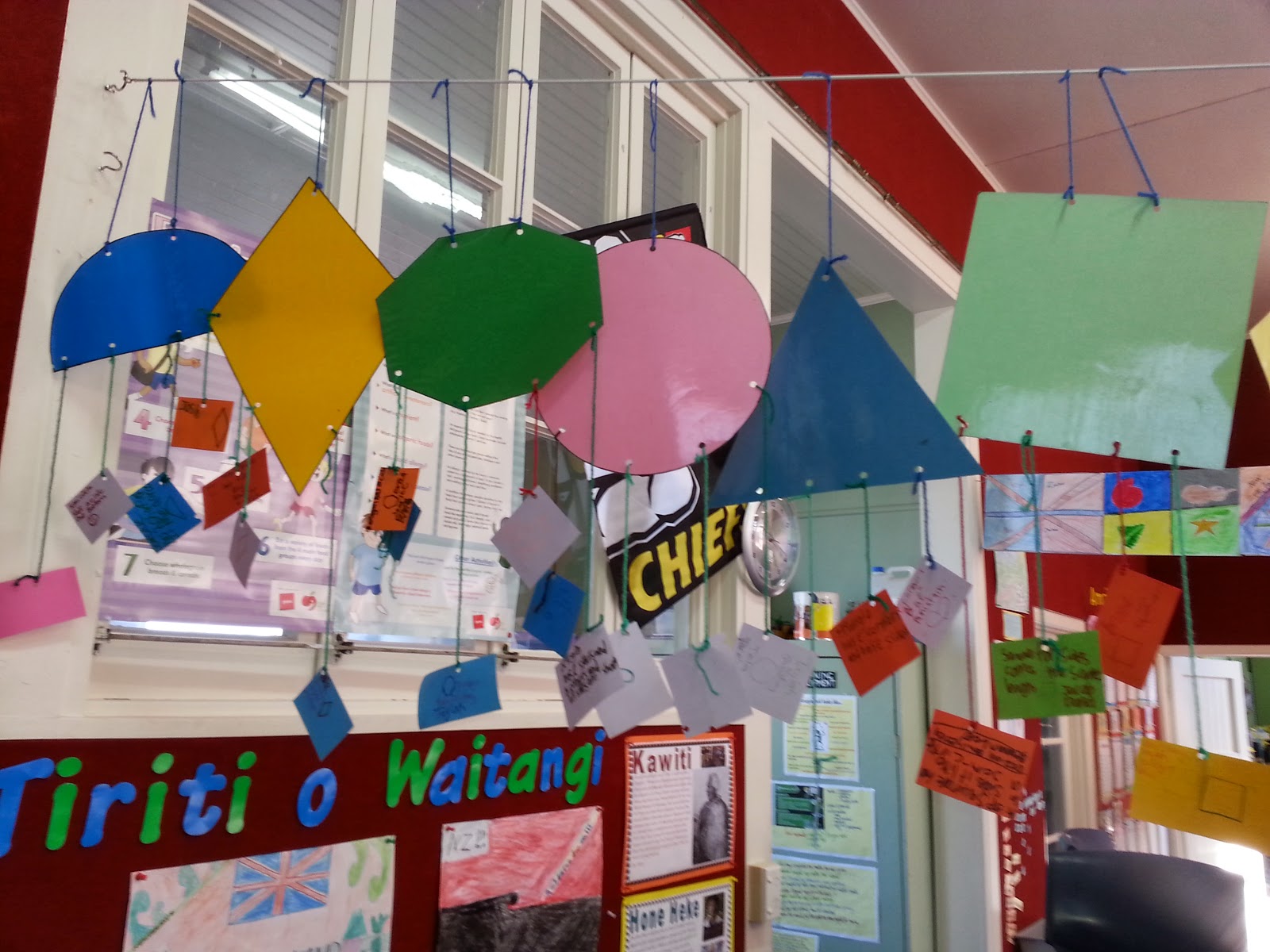 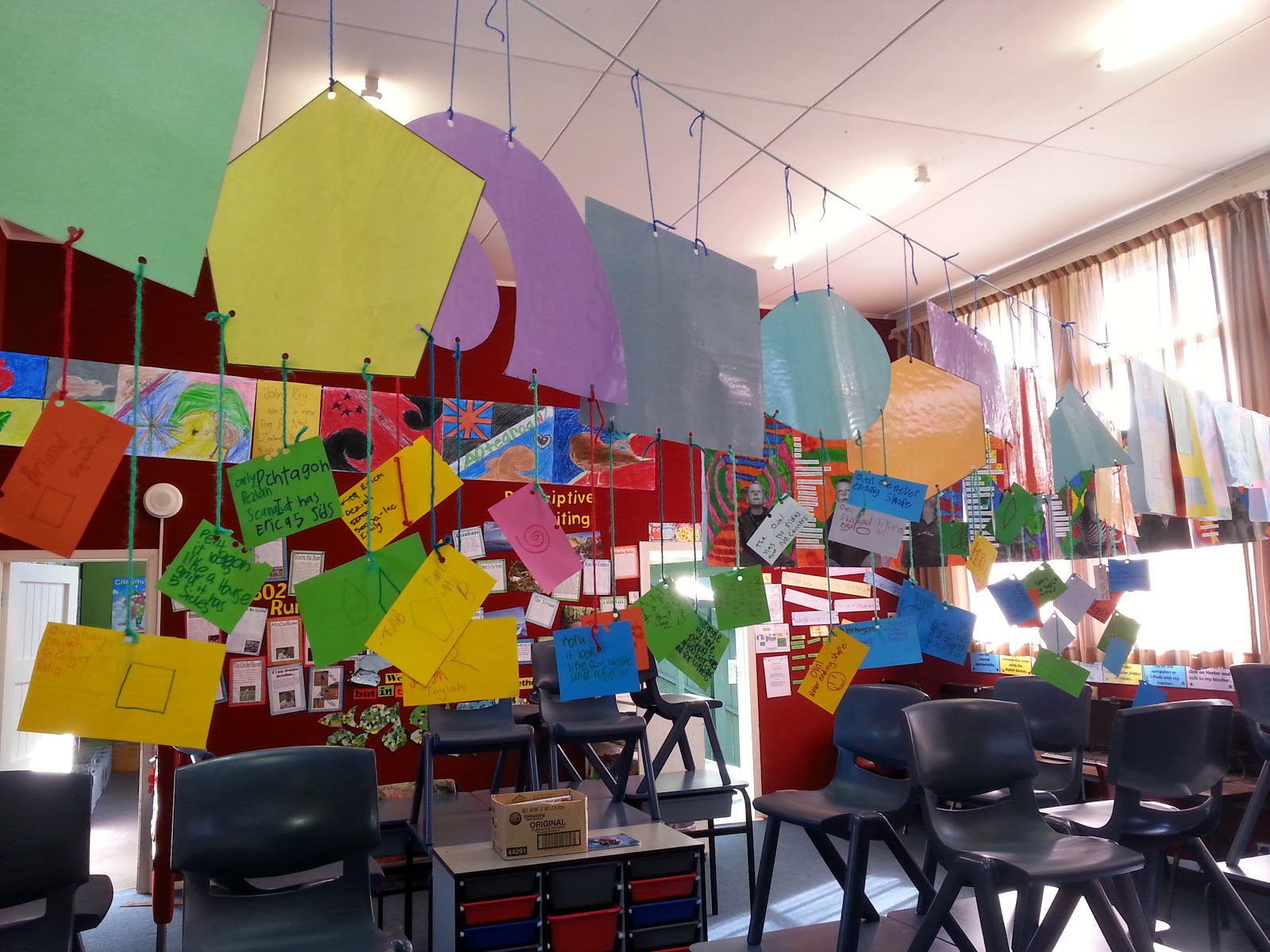 And here are more of the flags hanging on the wire across the back of the room. 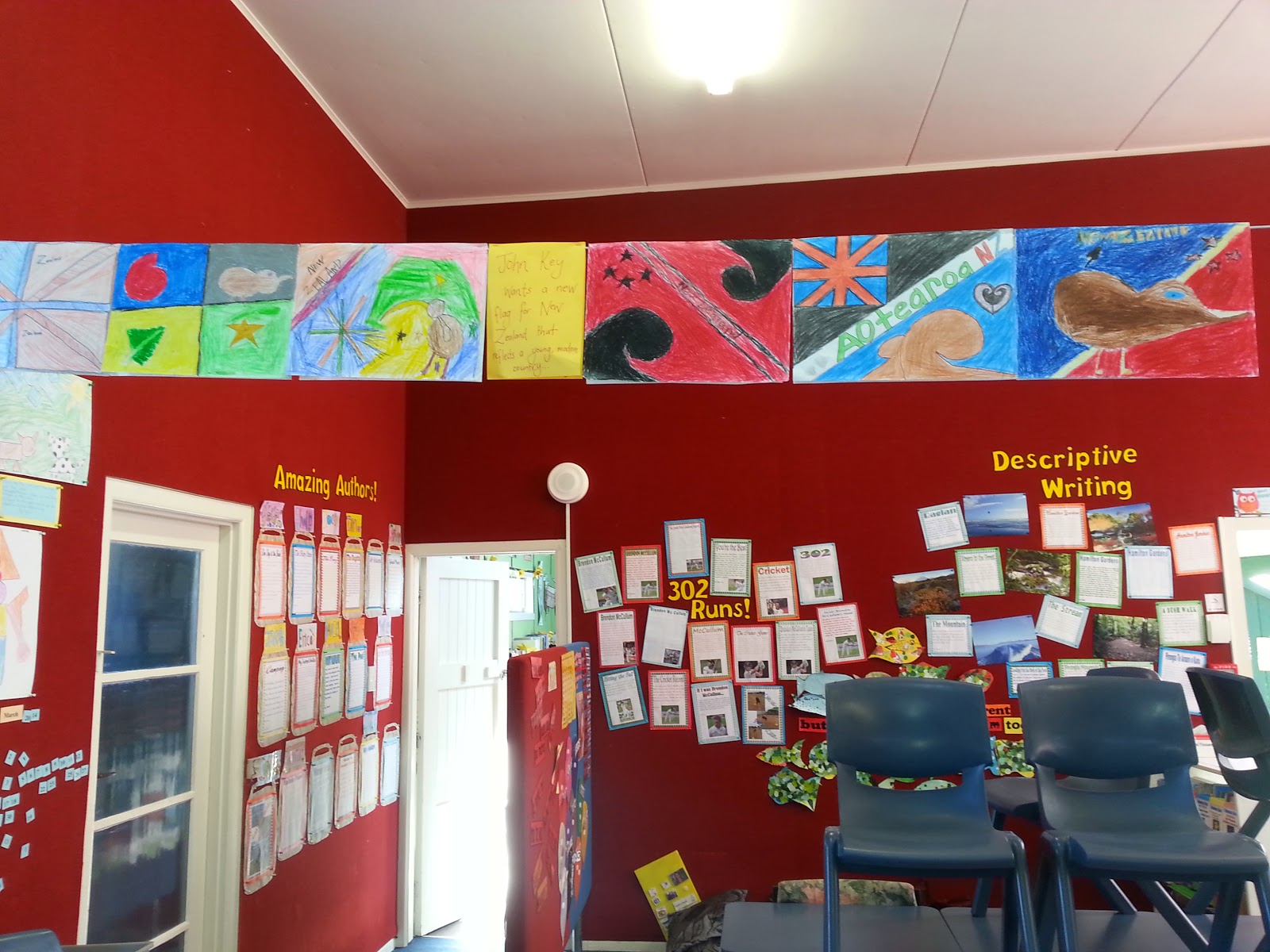 Bruce wanted to see writing about the children's holidays.  Well here it is!!  No pictures sorry Bruce!!  And I must confess that I typed up 13/16 stories.  But the kids did get to choose the fonts, colours and borders.  It was purely a time thing. 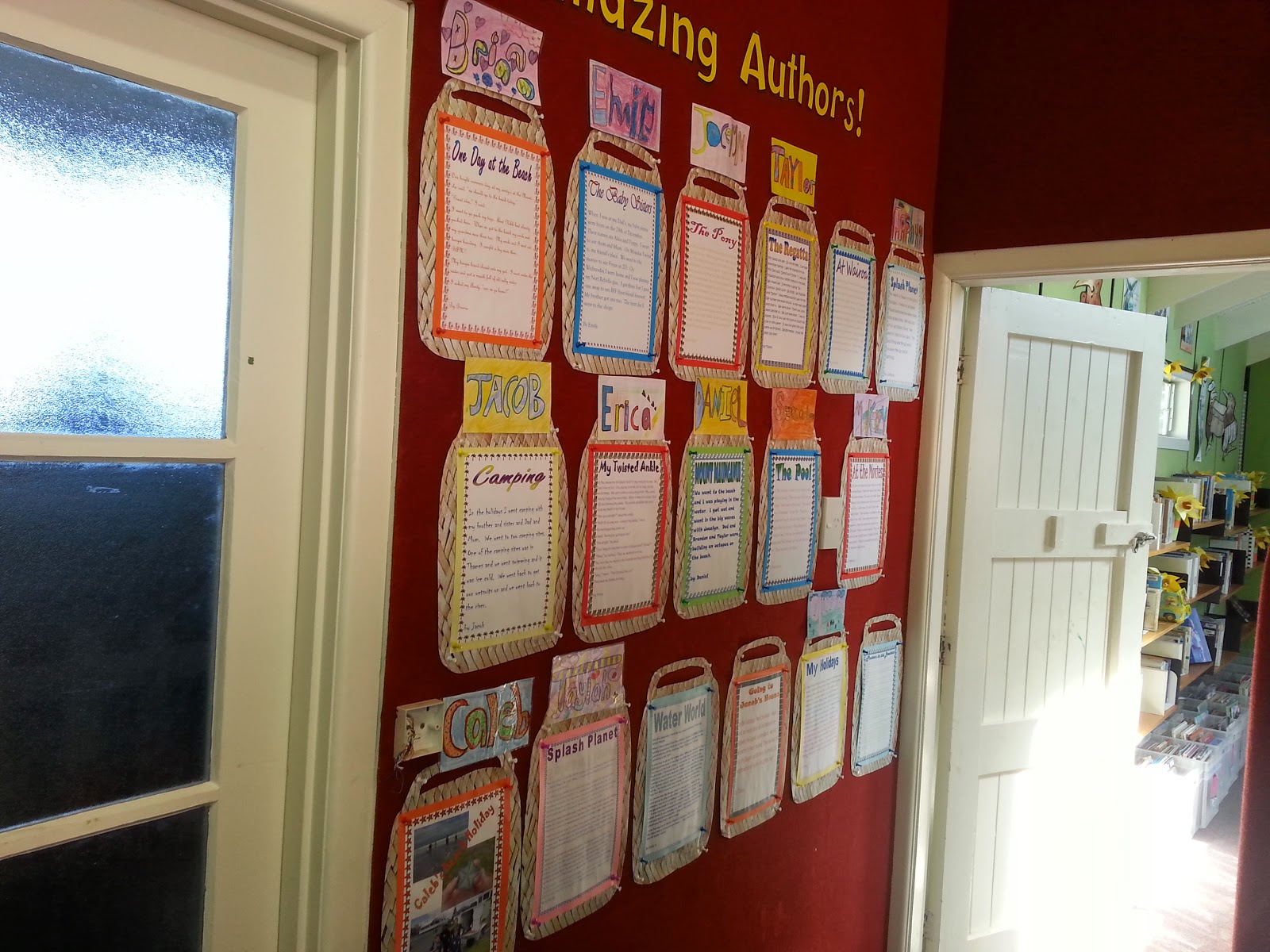 Brendon McCullum made history with his 302 runs, and it was a great opportunity to write stories about it from Brendon's point of view.  The language that some of the children used to describe how Brendon may have felt inside of himself was great.  You may also notice that one story in the picture above and in the pictures below are actually photos.  One student has Downs Syndrome, so we used pictures from his family holiday, or photos of him playing cricket or things he likes doing or creating the same kind of picture so he has a 'story' too. 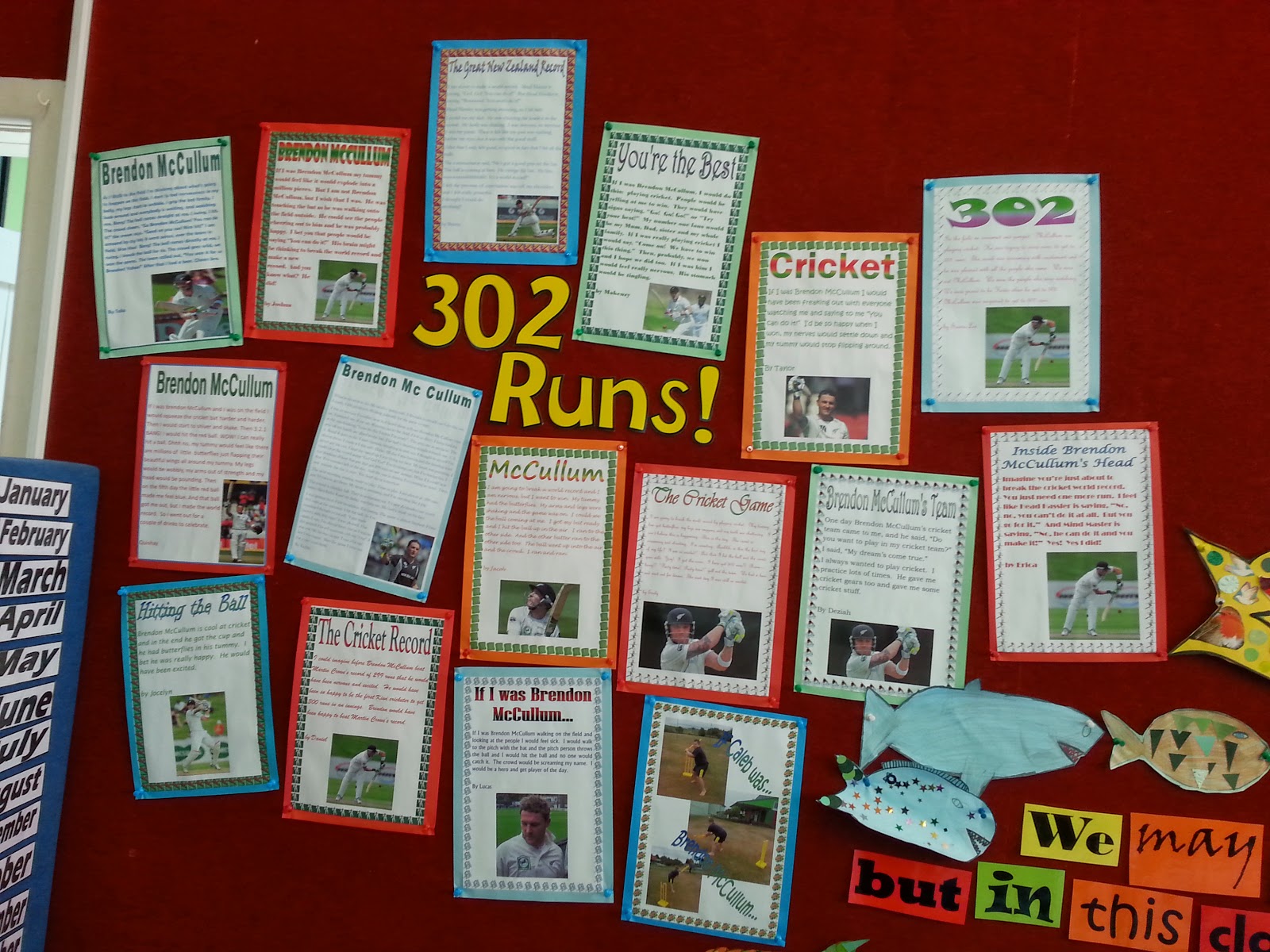 These are some of my resources for Te Reo Maori that I have made myself over the years. 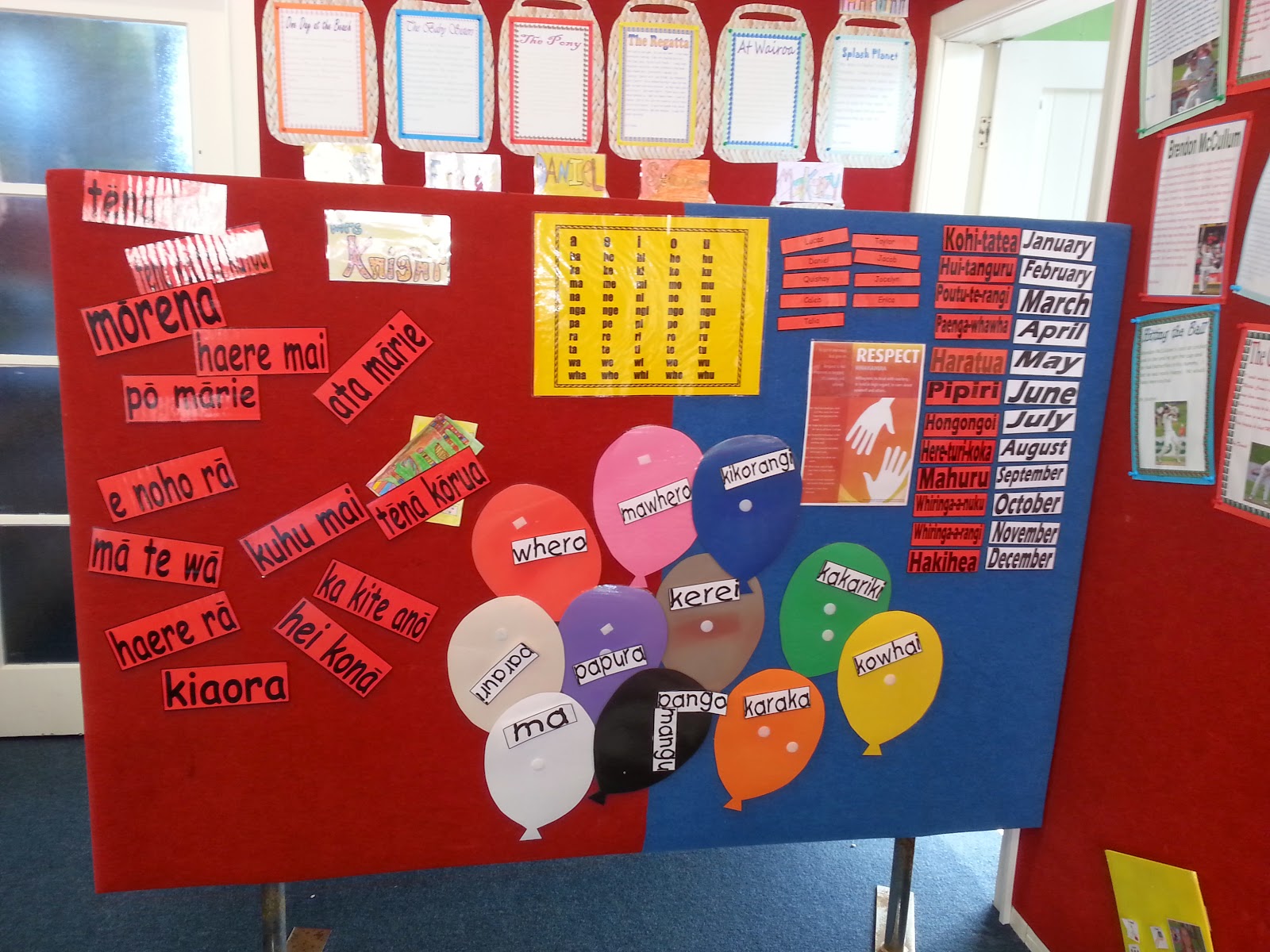 Pinterest as I thought it would be a great first week art activity.  I love it.  Just something simple, yet effective.

I wanted to reinforce the idea that we are all different and it's ok not to be the same.  This activity was also very good for including my special needs student and for the new Year 4s who need to learn about presentation. 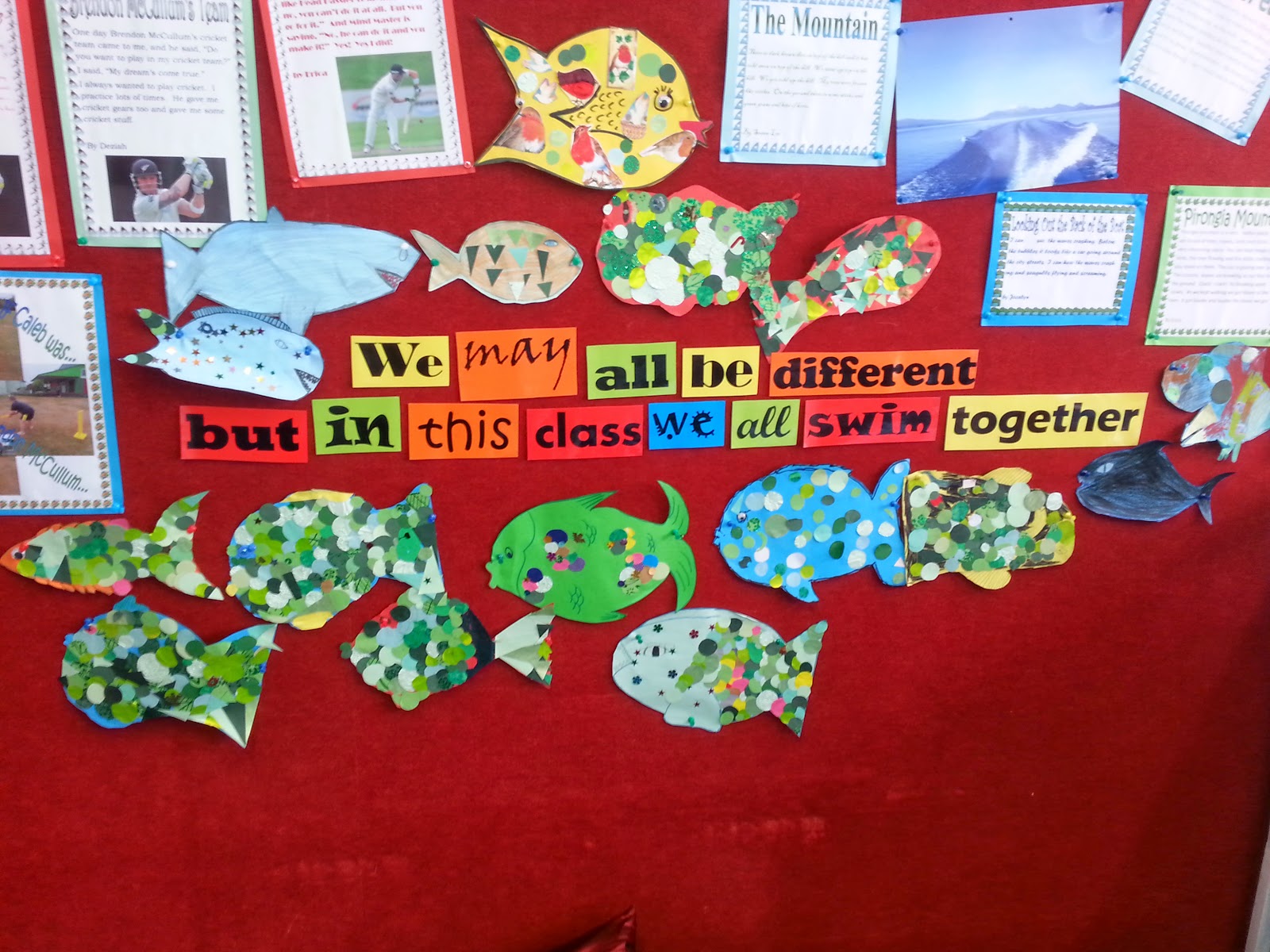 I love calendars because of the amazing photography.  We were given a box of calendars on the Waikato that were from 2012 last year.  So I gave each child a calendar and asked them to choose the picture that spoke to them.  I really pushed using adjectives and similes (because it's the "done thing" to do now - and I didn't know what they were until I'd been teaching a few years and my stories at school were good!).  Yeah, I confess that I typed 11/14 stories.... but the kids choose the colours, fonts and borders!! 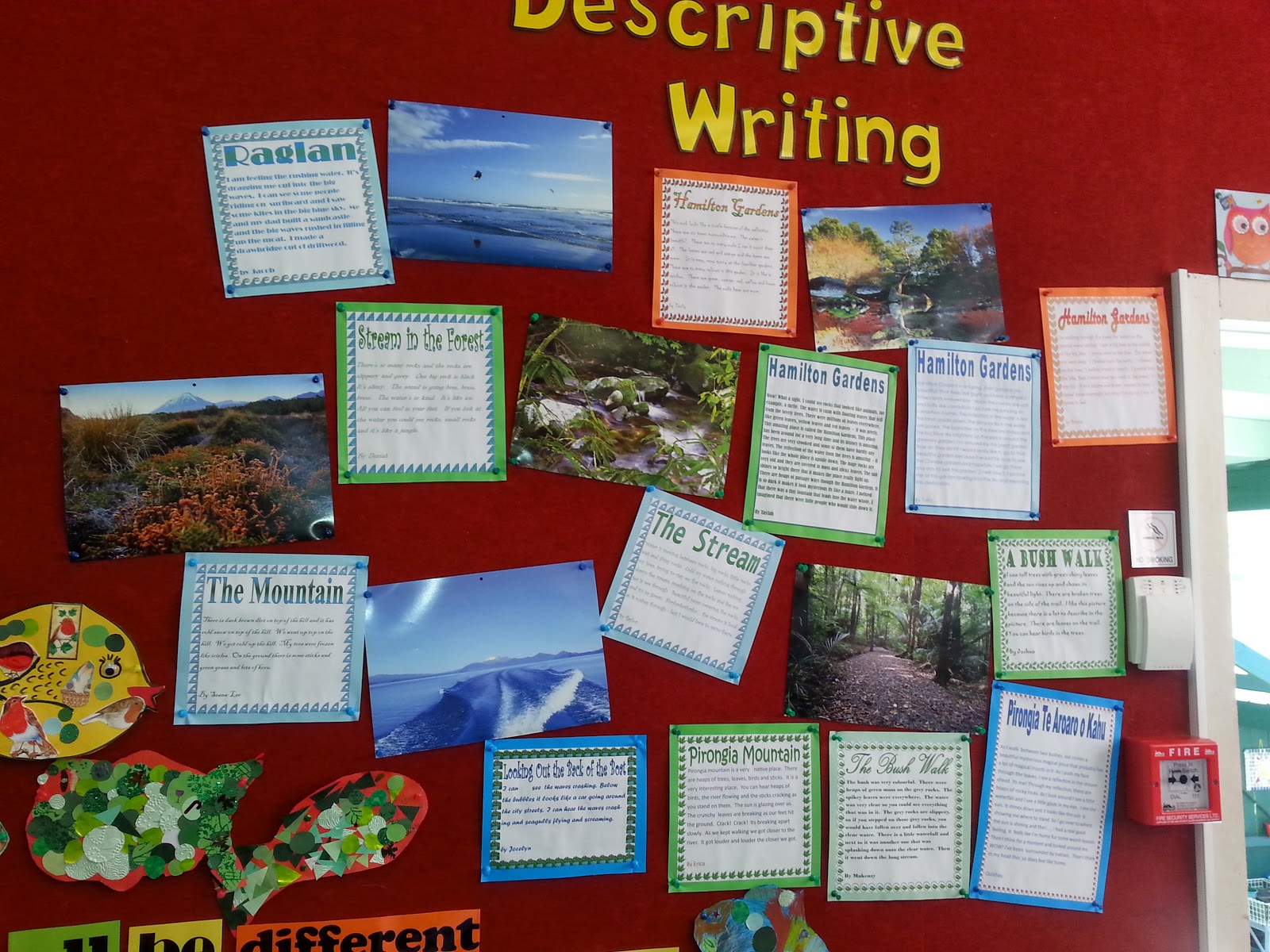 From a poem we were reading we got on the simile bandwagon.  For a change I got the kids to write them out and we kept the 'design' simple - go over the writing in felt, colour in the background with jovis or coloured pencils. 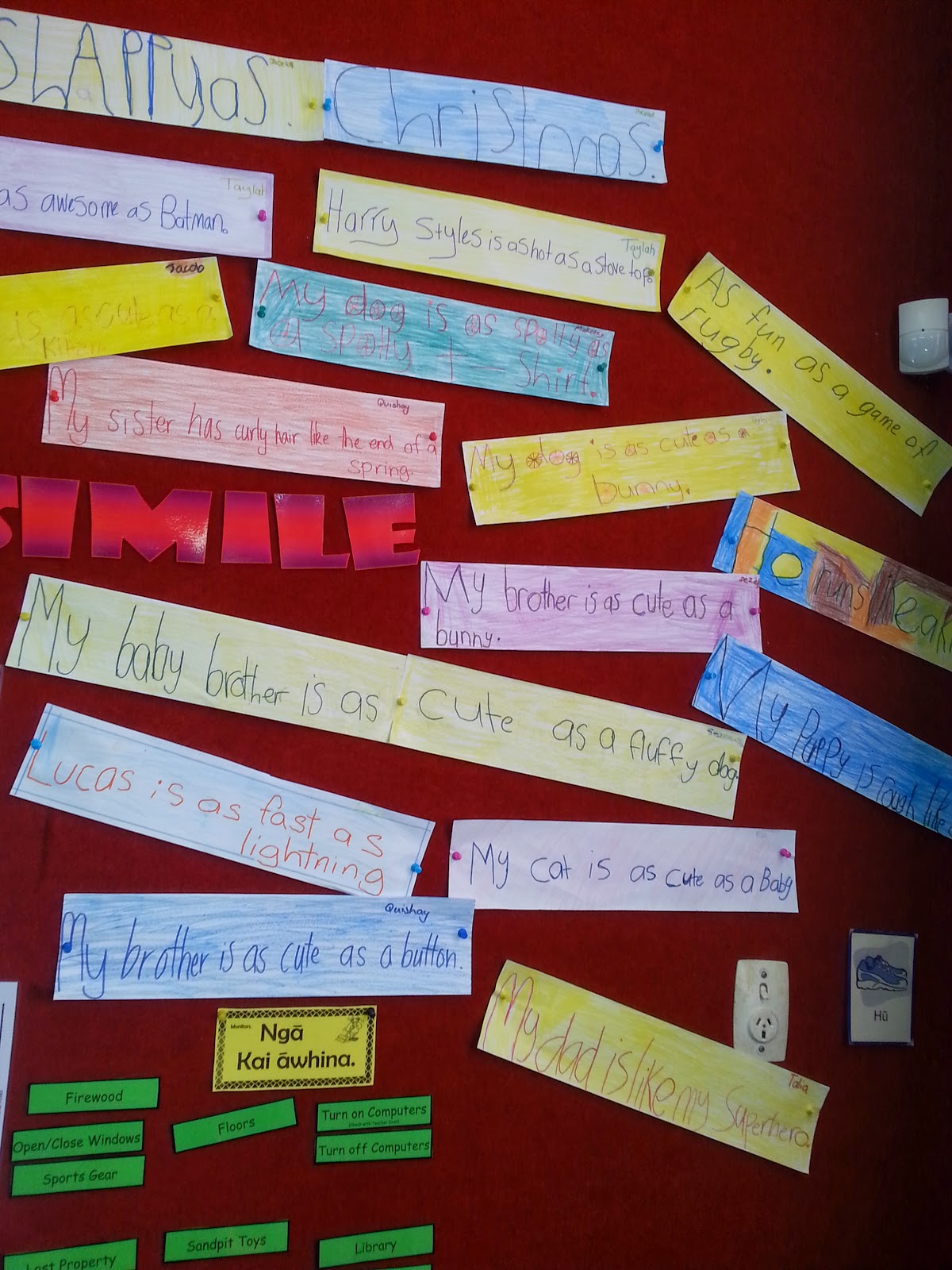 Here are the Bio Poems that I blogged about the other week.  I'm still so in love with them!!  I think it is the contrast of the black and white photo and text against the coloured background.  This time the kids did the typing.  However, I confess I printed out the photos.  The rest is all kid labour. 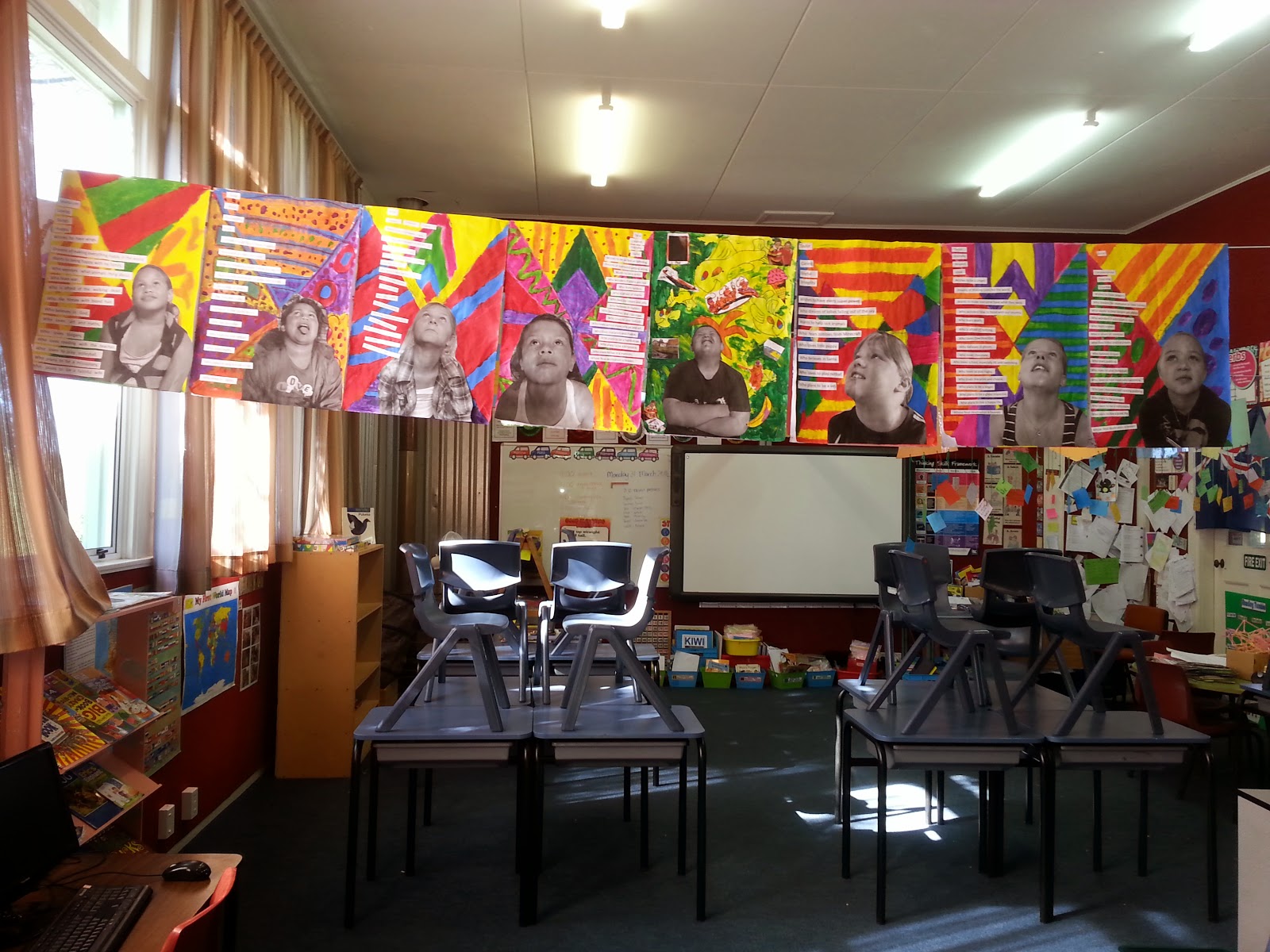 These pictures were created by tracing around 2-D shapes and then colouring them in.  Then I got them to write about what shapes they used to make different aspects of the picture.  Not the most exciting writing, but I have some kids that still struggle to match the name of the shape with the shape - not good in a class ranging from Year 4-8. 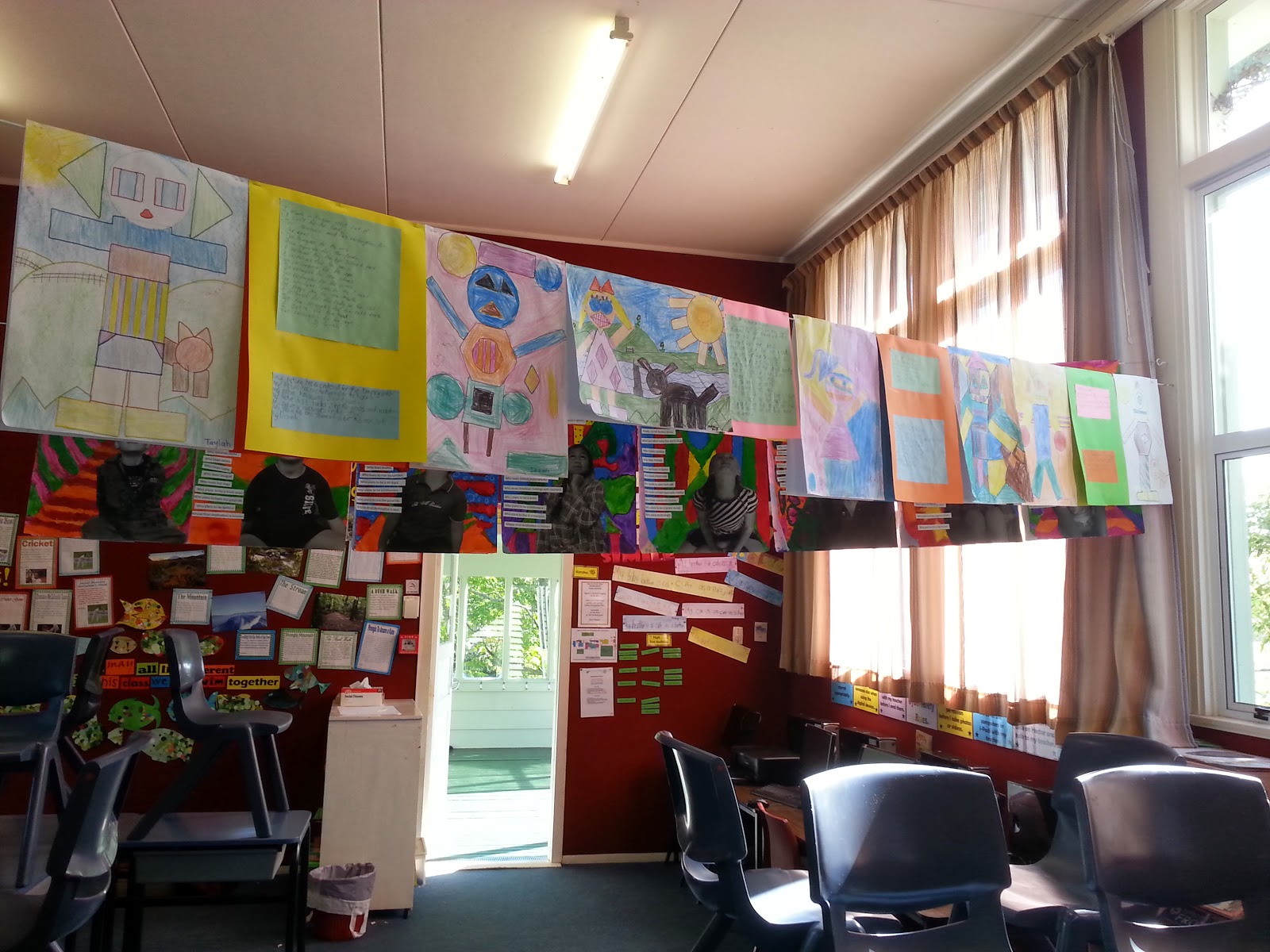 Ok, here is the commercial stuff - maps and flags.  We refer to the maps a lot.  I want kids to know where places are in New Zealand and the rest of the world.  It was something my teacher was big on when I was a kid, and I'm still grateful for it now.  I also think that it is important that they can recognise flags of different countries.  A bit of 'useless' general knowledge never hurt anyone, but might save them some embarrassment (or even their lives) if/when they do an OE. 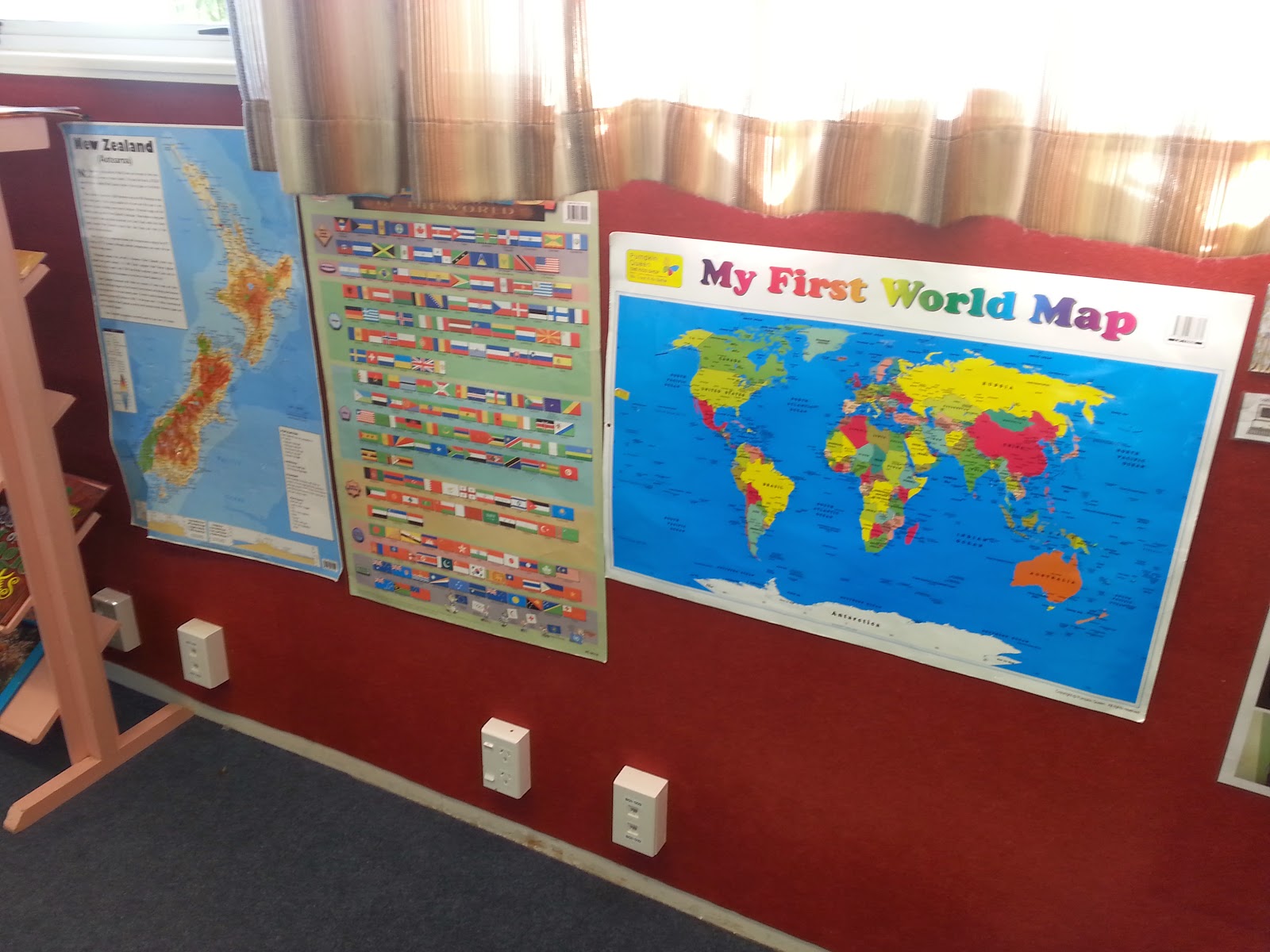 The Thinking Hats by DeBono.  I refer to these a lot with our critical thinking.  Also you can see some Te Reo Maori resources I purchased from a local group as their fundraiser a few years ago.  And yes, that is a whiteboard beside an ActivBoard. 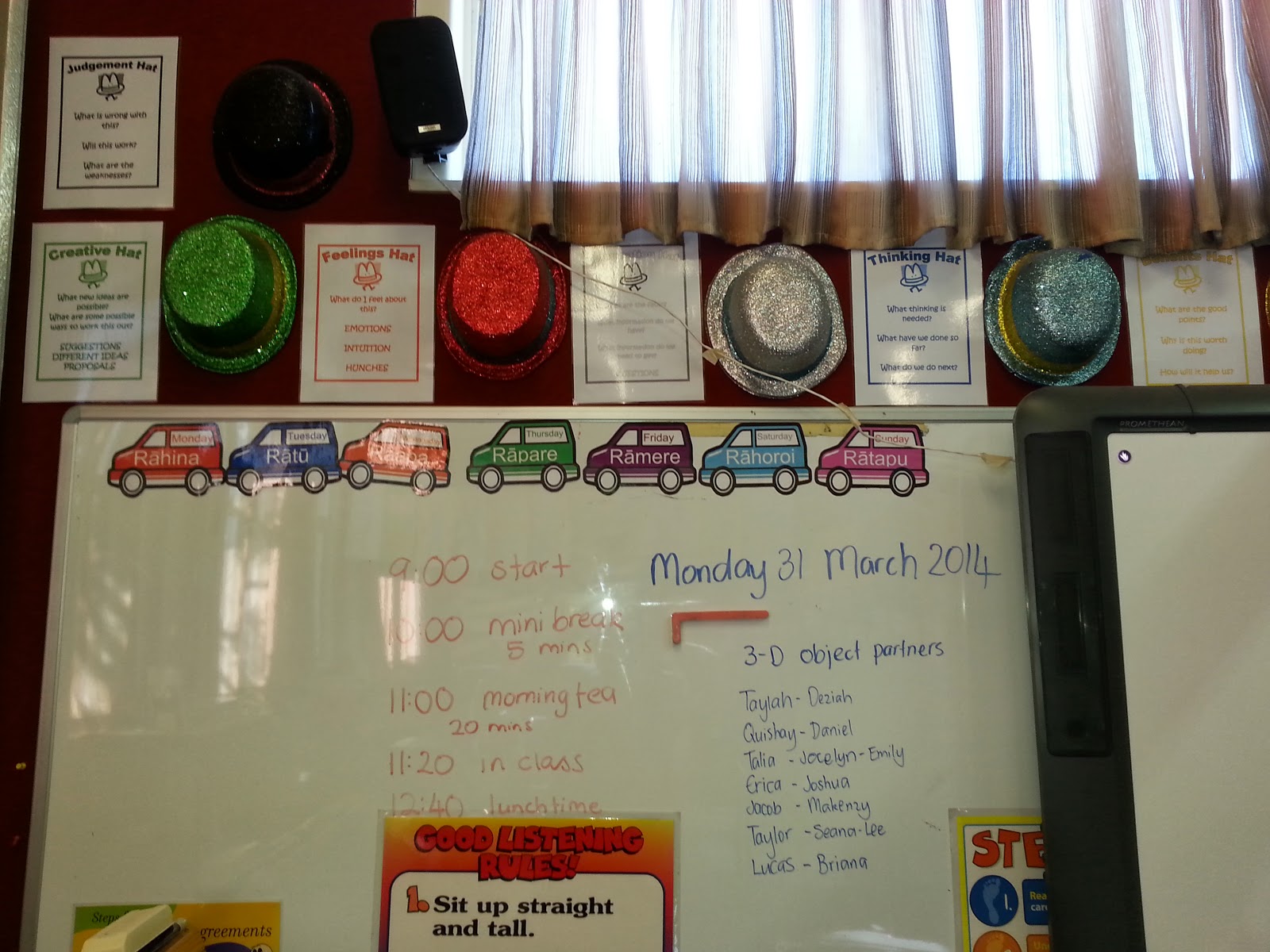 The big flower, bees and poppies were actually made last year, but I love them, so they are staying until a replacement display is made.  Yep, there is the commercialised literacy stuff on the walls for the children to refer to.  And that is my flag I bought to take to All Black games on my OE - I like to have it displayed as a reminder that my forebears fought under that flag for New Zealand. 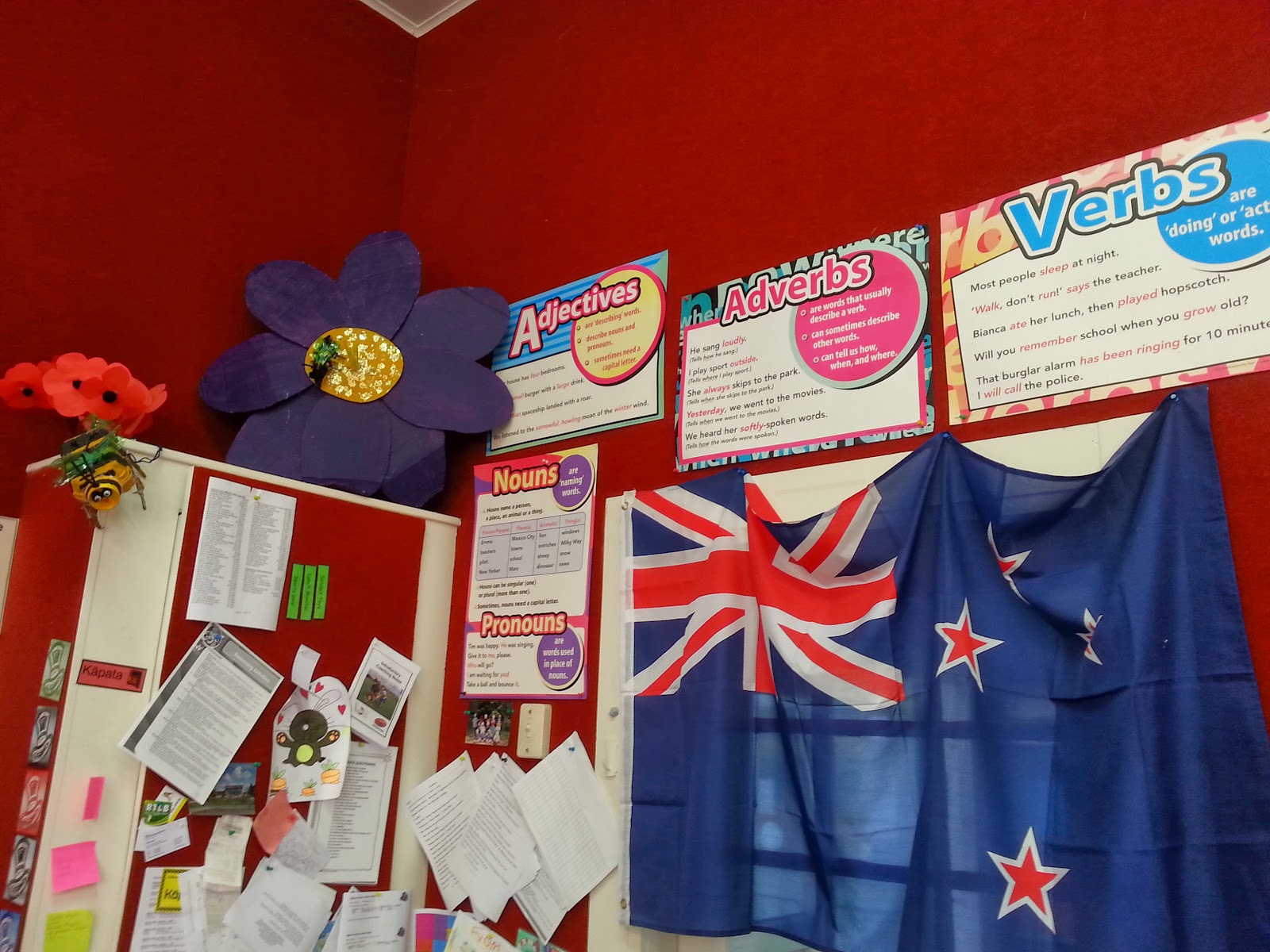 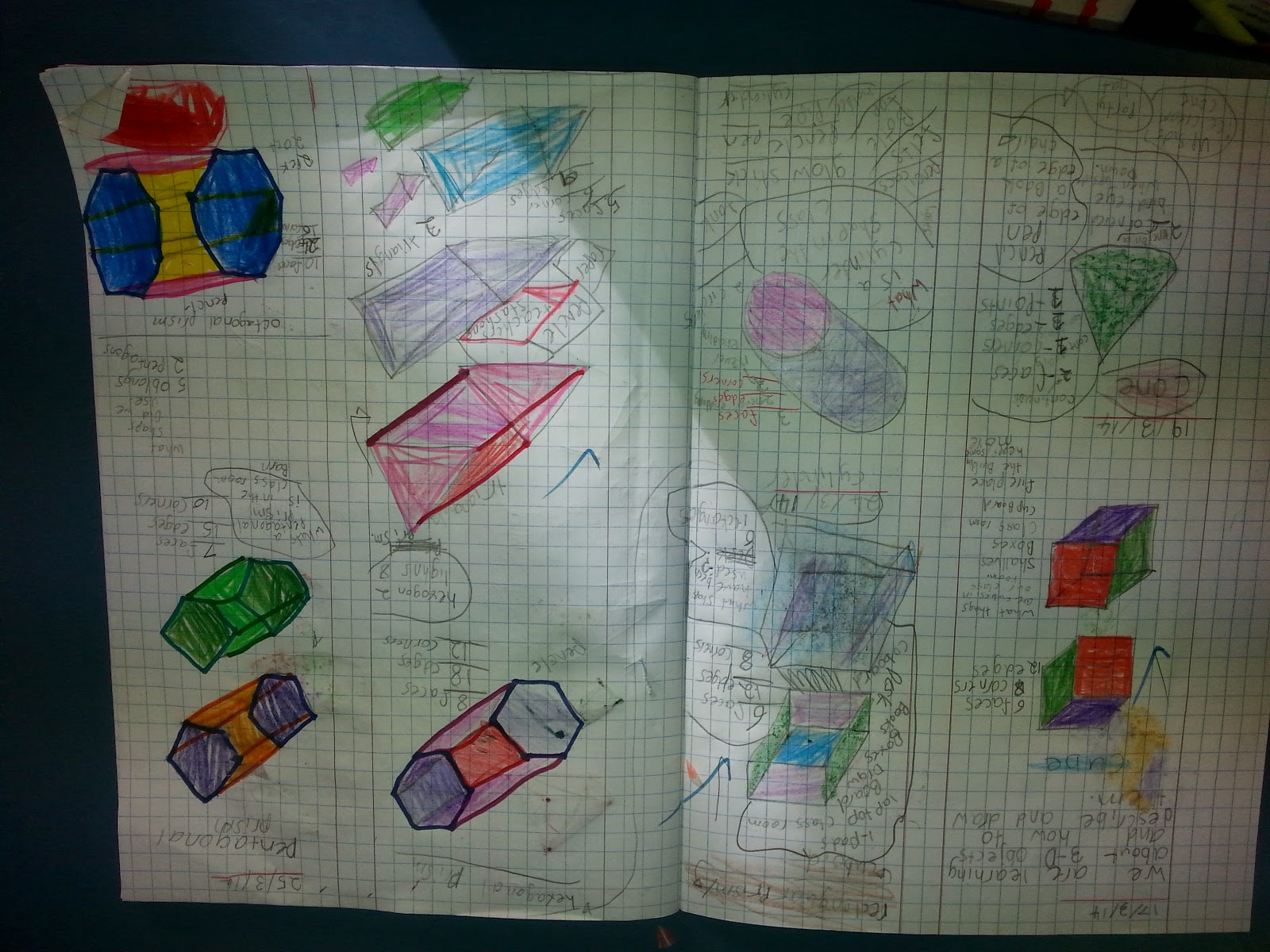 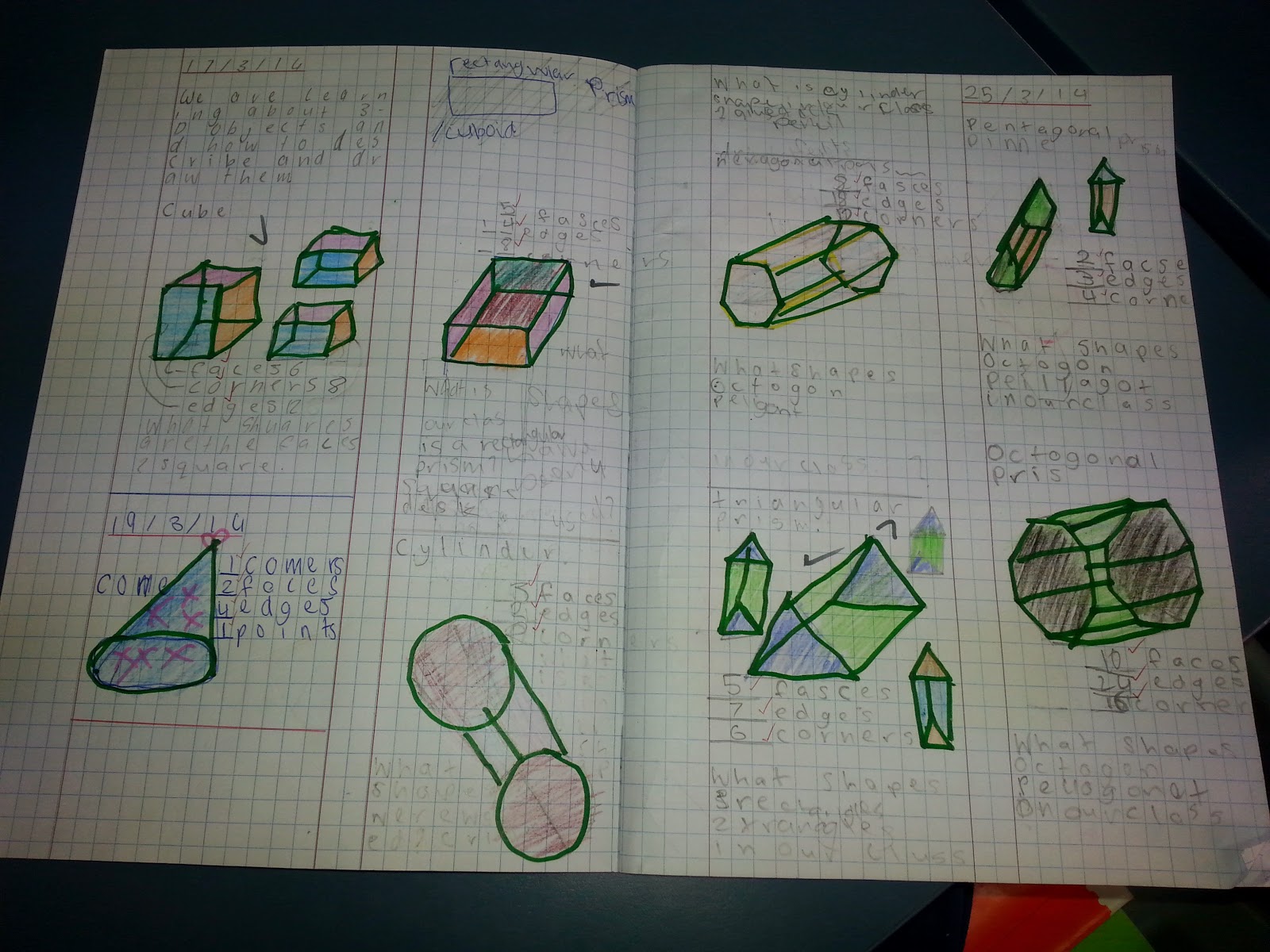 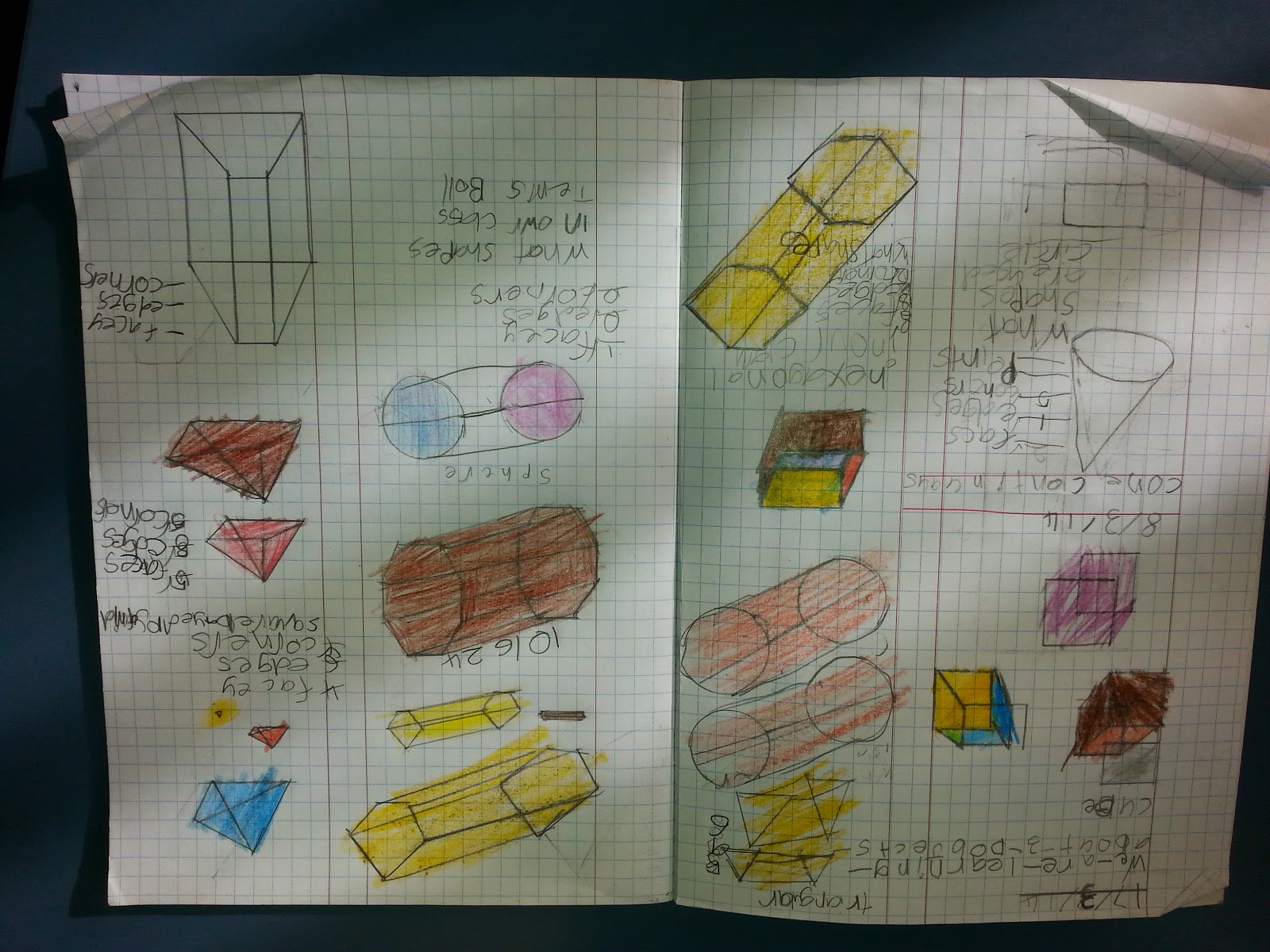 And this is the next step on our geometry journey.  After demonstrating and teaching each child how to draw 3-D objects as you can see from photos of the kids books above of their efforts (love doing this on the ActivBoard), we then moved on to creating them with straws (below).  The next step will be to make the objects from nets.  They will be displayed from coat hangers hanging on more wire and will also have cards with the attributes of each object described. 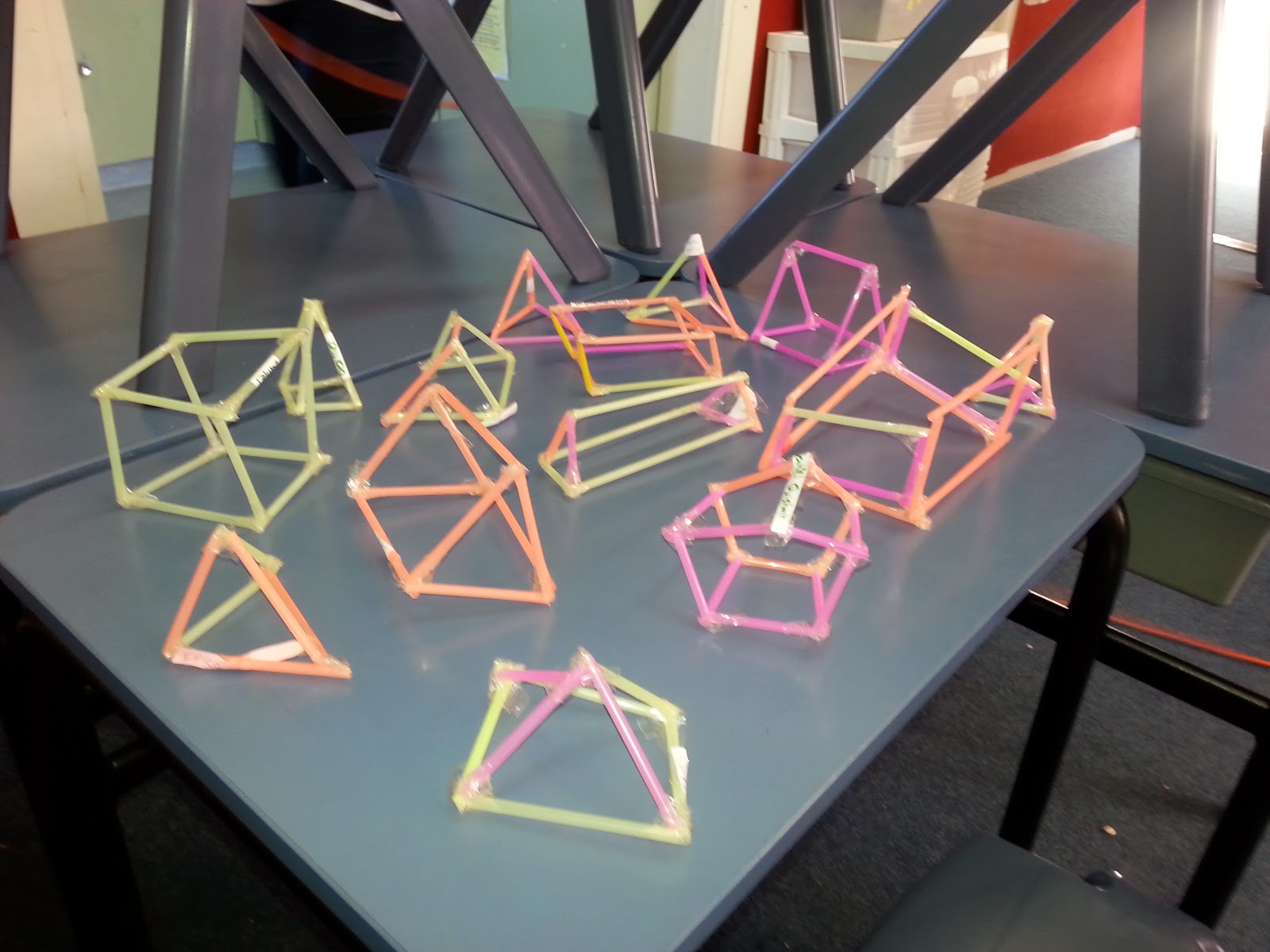 So that is a trip around my classroom at the end of Week 8.  I hope you enjoyed it.  Maybe there is something you can take away from it.  And if you have any tips, they will be gratefully received.
Posted by melulater at 17:30